Mine to Keep by Cynthia Eden 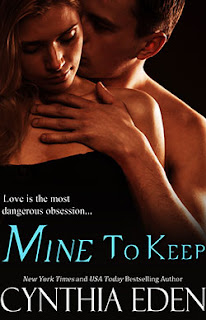 Love is the most dangerous obsession…
Skye Sullivan is trying to put the pieces of her life back together. She survived a brutal stalker and escaped his abduction, and now she is looking to the future—a future that includes Skye’s lover, billionaire Trace Weston. Skye thinks the danger is finally over for her.
She’s dead wrong.
When Trace’s past comes back to haunt him, Skye discovers that the man she loves isn’t quite who he seems to be. Trace has been leading a double-life. An ex-special forces agent, his military training turned him into the perfect killing machine. He made more than his share of enemies during his time in the military—and as he built his security empire—and one of those enemies is striking back.
He won’t lose her.
Skye is the one weapon that can be used against Trace—his only vulnerability. But he won’t let her go—he can’t. Trace will do anything necessary to protect Skye. Anything. Yet when she discovers the secrets that he’s tried to keep hidden, Skye’s pain and rage may send her running directly into the cross-hairs of a killer…

Review
I have to say I haven't found a book written by Cynthia Eden that I haven't liked. Mine to Keep in the second book in the Mine series and once again focuses on Skye and Trace from Mine To Take. The second book pretty much picks up after the first one ends. and the second book really shouldn't be read until you read the first one. You'll enjoy both stories more and get a clearer picture of who is who. Where as in book one the focus is more on Skye's problem, this time, we are dealing with things from Trace's past. The story is well written and keeps you guessing till the end. Like in the first book Alex gets on my nervous but not as much. I love the added friends from Trace's past that we get to meet and it's good to see Skye stand up and be a match for Trace. I think you'll love both books and I can't wait for the next book in the series. Happy reading!
Labels: ARC Cynthia Eden