Thanks for joining us in celebrating Lynsay Sands 10 years of publishing her wonderful Argeneau series. I will start off with reviewing her upcoming book One Lucky Vampire which comes out on September 24th. Then I will also review my favorite couple
Leigh & Lucian from Bite Me If You Can.

Yes, Nicole Phillips has miraculously survived what appear to be three separate death threats from her ex-husband-to-be. But no, she does not need protection. At least that’s what she keeps telling everyone. But when her new housekeeper arrives complete with a sexy build and a no-nonsense attitude, she can’t help but feel a little safer. That is, until the passion between them heats up and she knows she’s really in trouble.

Jake Carlson never wanted to be immortal, or a vampire, in the first place. Turned during an emergency by Vincent Argeneau, he’s been living his new life away from the clan as a bodyguard for hire. That is, until Marguerite Argeneau reappears with a new job opportunity: undercover protection for a family friend…as a housekeeper. But when he discovers his beautiful new client is tougher than he first thought, Jake thinks he might be the one in need of protection. Just not the physical kind.

With two weeks until her divorce proceedings are final, Jake must do everything in his power to keep Nicole safe and happy… he just hopes he can keep ahold of his heart in the process!

Excerpt (Chapter 1 of ONE LUCKY VAMPIRE)


Jake just shrugged and sat back, leaving her to it. She could write it if she wanted. It didn’t mean he had to cash it. He accepted the check when she handed it over, slipped it in his pocket, and then crossed his arms and said, “All right, tell me everything you know about Nicole and Rodolfo.”

Review
I very much enjoyed One Lucky Vampire. It had many twists and turns to it that make for a enjoyable story. As always other characters from past books showed up and gave you a chuckle. I was so happy to see the twins. Love them! In One Lucky Vampire you have Jake who's done nothing but run from what he is since he was changed years earlier, and Nicole who's marriage is ending the hard way. They come together and quickly fall for each other. Each book is a stand alone but I feel they are much richer when read in order. This is a great series to spend you fall and winter with. 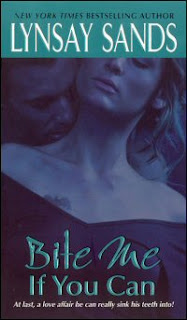 One minute Leigh is walking home in the early hours of the morning, and the next a vampire is sinking his teeth into her neck. Turns out it was a rogue vampire marked for termination, but it does Leigh little good because the damage has already been done. She’s become one of them.
Lucian Argeneau, hunter of rogue vampires, has been alive for over two thousand years, and there’s very little to excite him anymore. Food has become tasteless, sex is ordinary. Then Leigh drops into his life. Suddenly he finds himself craving coffee… and imagining the sassy brunette atop the black satin sheets on his nice big bed. It’s Lucian’s job now to enlighten Leigh on the inner workings of being immortal… and tutoring her is igniting a fire in him that hasn’t burned in centuries.
But until they stop a renegade bloodsucker from destroying the human race, the passion will have to wait!

Leigh & Lucian Argeneau
When I was asked if I'd like to participate in this celebration I couldn't wait. I can't tell you how much I love this series and what these characters have meant to me all these years. We were then asked if we wanted to talk about our favorite couple. How could I turn this down? I will admit that I've enjoyed all the couples from each of the books in this series but my all time favorite would have to be Leigh and Lucian. Mostly Lucian, but do you blame a girl. The man is hot! At times he can be a little scary, but even that's sexy. He's one of the oldest immortals and runs the enforcers. It's his job to protect his race, and the family that he loves. In the books before his he didn't understand this lifemate thing. Love was not for him, that is until he meets Leigh. Then everything changes. You can't help but laugh while reading their story. They are perfect for each other. Lucian alone is worth reading the series for. Do yourself a favor and pick up their story. For those who aren't into paranormals because of how dark you might think they are this is a great series to read. You will find the whole series full of humor, love and family, with a little bit of bad guys thrown in.

About the Author:
LYNSAY SANDS is the nationally bestselling author of the Argeneau/Rogue Hunter vampire series, as well as numerous historicals and anthologies. She’s been writing stories since grade school and considers herself incredibly lucky to be able to make a career out of it. Her hope is that readers can get away from their everyday stress through her stories, and if there’s occasional uncontrollable fits of laughter, that’s just a big bonus.