How To Tame A Wild Fireman by Jennifer Bernard 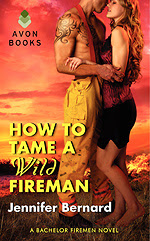 How to Tame a Wild Fireman

Coming September 24, 2013!
The Bachelor Firemen of San Gabriel have
a rebel among them, and there's only
one woman who can put his flames out.

Firefighter Patrick "Psycho" Callahan earns his nickname every day. Fast, fit, and a furious worker, he thrives on the danger which helps him forget a near-tragedy that changed his life forever. But when his off-duty carousing gets out of hand, Patrick is sent back to Loveless, Nevada, where the wildfire threatening his hometown has nothing on sizzling Dr. Lara Nelson.
Lara would rather be thought of as the physician who returned to Loveless than as the misfit brought up at a hippie New Age commune. But right now she's focused on her job at hand, patching up injured firemen...until the past hits her in the hard-muscled, blue-eyed form of Patrick Callahan. Now, the embers of their decade-old attraction have ignited into a full-on inferno, as the bad-boy firefighter and the good doctor take a walk on the wild side they'll never forget.
Barnes & Noble
Amazon
Jennifer Bernard's Website Link

Review
You can help falling in love with a fire fighter named Psycho. The name alone bring so many things to mind. Of course what the name doesn't tell you is, don't judge someone by their name. That you have to learn for yourself. I loved this story. It's well written with a wonderful plot and great characters. Just when your about to write Psycho off for being a idiot, you learn so much about his past and what molded him into the man he is. I wasn't sure if in the beginning I thought that Lara was enough of a match for Psycho but as the book continued I realized they are perfect for each other. They play off each others strength's, which in turn makes the other stronger. It's a wonderful addition to the series. Happy reading!