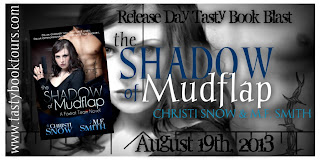 The Shadow of Mudflap
A Foxtrot Team Novel
By: Christi Snow & M.F. Smith
All the proceeds from the sale of this book will go to the Lubbock Red Cross.
Releasing: August 19th, 2013 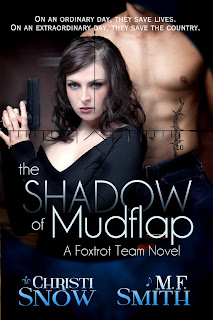 Blurb
To us, first responders are heroes. But for them, risking their lives is a normal, everyday thing.
Mudflap:
Born the baby of the family, Mudflap has always had something to prove to emerge out of the shadows of his older siblings. He spent eight years as a Special Ops elite sniper and is now a firefighter. But at his heart, he’s just a normal West Texas good old boy who loves his beer, women and football, until the Department of Defense calls him up to say they need his skills again.
Shanae:
Shanae is a first responder of a different sort. She’s a trauma nurse who works on a medical evacuation helicopter team. But while she lives a life full of adrenaline every day, it’s just a cover for her real life, where she hides in the shadows and is secret agent, Shadowfox for the Lubbock Foxtrot Team (LiFT). She’s living the kind of life that most people think exists only in movies and books.
Working for two different branches of the government, Mudflap and Shanae are in a race against time and the terrorists who threaten the very heart of West Texas life, football. They’re working toward the same goal, but find themselves in a confrontation against each other and the lies they’ve each had to hide behind. Can love win out in the end or will the cost be each other and their very lives?
First responders are heroes every day, but this story tells the tale of when they become even more and find love along the way. The key is for them to stay alive so that they can complete their mission and just maybe live happily ever after.
On an ordinary day, they save lives. On an extraordinary day, they save the country.

Christi Snow
As an avid reader her entire life, Christi Snow always dreamed of writing books that brought to others the kind of joy she felt when she read. But...she never did anything about it besides jot down a few ideas and sparse scenes.
When she turned 41, she decided it was time to go after her dream and started writing. Within four months, she'd written over 150,000 words and hasn't stopped since.
She's found her calling by writing about sexy, alpha heroes and smart, tough heroines falling in love and finding their passion. She's truly living the dream and loving every minute of it.
Her tagline is... Passion and adventure on the road to Happily Ever After. She's loving this adventure!
www.christi-snow.com
http://smittenwithreading.blogspot.com (book review blog)
https://www.facebook.com/christisnowauthor?ref=hl
https://twitter.com/ChristiSnow
http://www.goodreads.com/author/show/5849322.Christi_Snow

M.F. Smith
Mudflap is a morning show personality for 96.3 KLLL in Lubbock, TX. He’s been on the morning show for seven years and in radio for over ten years. He’s entertained people all over the world, and has helped raise money for many non-profit agencies and charities.
Mudflap loves to see people smile and believes everyone deserves a hug.
KLLL radio station website

THE SHADOW OF MUDFLAP Excerpt 1…
Because everything about this book is set around a college football season, the book is broken down a bit differently than your normal book usually is done. Instead of chapters, there are weeks (i.e. the weeks of the football season) and there are also sections called Halftime Texting. These feature flirty little exchanges of texts between the hero, Mudflap, and the heroine, Shanae. The following is my favorite Halftime Texting section from the book…
Halftime Texting
Shanae: I have two cookies: one is a snickerdoodle, one is a chocolate chip.
Mudflap: Okay, that’s just mean when I haven’t eaten lunch yet.
Shanae: It’s a test. If I offer you one, which one do you take?
Mudflap: You’re testing me?
Shanae: Yes, now answer the question.
Mudflap: I’d take the snickerdoodle.
Shanae: Good answer, but why?
Mudflap: I have sisters. I know better than to get between a girl and her chocolate.
Mudflap: Did I pass?
Shanae: With flying colors.
Pause…
Mudflap: You weren’t just teasing about the cookies, right? I really am hungry.

THE SHADOW OF MUDFLAP Excerpt #2
“Hey, there. You look good enough to eat,” he growled. He glanced back at his Bronco. “Unfortunately, Derek is waiting for us in the car so I can’t take a nibble.”
A frisson of awareness skated down her spine. That tone in his voice…yummy.
“Thanks,” she said as she leaned up to give him a quick kiss on the cheek. “You know how to make a girl feel good.” She lingered for a moment right below his ear to whisper, “You look pretty damn good yourself. But it’s hot and we don’t want the poor thing to suffer from heat exhaustion. I’m confused though.” She glanced at him as they walked out toward his truck. “Why would you bring your dog golfing? Are they even allowed on the course?”
He pulled her door open for her, but stalled her entrance into the Bronco. “Dog? I don’t have a dog.”
She sat in the seat, but scowled at him in confusion through the still open door. “Isn’t Derek your dog?”
Mudflap burst out laughing as he shut her car door. But it was the outraged, “What the hell did he tell you to make you think that?” coming from the backseat that told her she’d gotten something wrong.
She turned slowly to him. He was a young, clean cut, extremely good looking guy, who was not happy right now. He looked like a model from a young, hip magazine ad; well, he would if he wasn’t scowling.
Wincing, she offered her hand to him. “I guess you’re Derek, huh?”
Mudflap got into the car and continued to laugh at Derek’s expense. Derek shoved at his shoulder and muttered, “Asshole,” before offering her his hand. “Yes, I’m Derek. It’s nice to meet you Shanae.” His scowl quickly morphed into a flirty smile. “Already I can tell you’re too good for this guy. I say we dump him on the back nine and you and I can make a fun day of it without him.” He waggled his eyebrows at her.
Uh oh, this guy and that mischievous smile was trouble. She couldn’t help the giggle that erupted. “Sorry about the dog comment. I misunderstood.”
“Aw, sweetheart, no forgiveness is necessary. I know who to blame.” He turned to glare again at Mudflap. “Besides, gracing us with your beauty today more than makes up for it.”
Shanae couldn’t help the eye-roll. This guy was digging it deep.
“Hey, now. No horning in on my girl.” Mudflap frowned at Derek, but the corners of his mouth twitched with humor.
The two guys continued the back and forth banter all the way to the golf course, renting their equipment, and meeting up with their golf pro for the day, a very attractive redhead named Lisa. Shanae clued in on the fact that Derek had a bit of a crush on her simply by the fact that he continued to give both Shanae and Mudflap a hard time, but then got stiff when it came to interacting with her. It was sweet, if not for the fact that Lisa seemed completely oblivious to Derek.
Shanae would guess there was a pretty good age difference between the two. Derek was young, definitely early twenties, while Lisa was probably closer to thirty. Shanae doubted Lisa even saw Derek as a possibility for a date. She watched the two of them as Lisa corrected Derek’s form on the fourth hole. Lisa slid her hand down Derek’s arm to adjust his grip and Shanae could see all his muscles tighten in response.
Mudflap slid in to stand behind her. His hand wrapped around her waist felt entirely too right, so right she completely forgot about Lisa and Derek. She could feel the heat coming off his body and her pulse skittered.
But then Mudflap, who’d also been watching the other two, whispered in her ear, “I think his shaft is too big for that stroke.”
Of course, Shanae worked with guys all the time so her gaze immediately landed on Derek’s crotch where his erection pressed against his pants. “Don’t,” she hissed at Mudflap. “Don’t give him a hard time right now. Poor kid is infatuated and she isn’t even aware of him.”
Mudflap nuzzled her ear for a moment before whispering, “Ask her for some help on the next hole and make her aware. He’s a good guy. It would be nice if he could hook up with a woman who might actually appreciate him.”
And right there, Shanae’s heart melted a little bit more for this guy. Damn, sexy and sweet.