Justice For Sara by Erica Spindler 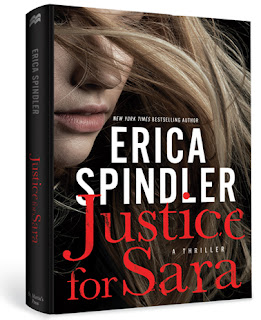 When seventeen-year-old Katherine McCall awakened one morning to find her beloved sister, Sara, brutally murdered, her whole life changed in the blink of an eye. Kat was named the prime suspect and, on a string of circumstantial evidence, charged and tried. While the jury found her innocent, not everyone else agreed, and her only choice was to go into hiding. But she carried a dark secret with her, one that made her worry she might actually have had something to do with Sara's death...
Now years later, Kat is still haunted by her sister's unsolved murder and continues to receive chilling anonymous letters, but she has tried to move on with her life. Until, on the tenth anniversary of Sara's death, she receives a letter that makes the past impossible to ignore: "What about justice for Sara?" What about justice for Sara? And for herself? Kat realizes that going back to Liberty, Louisiana, might be the only way to move forward and find some peace. And there's a killer out there who was never caught.
But the town she's come back to is hardly different from the one she left. The secrets and suspicions still run deep. Kat has an ally in Detective Luke Tanner, son of the former Liberty police chief, but he may be her only one. With plenty of enemies, no one to trust and a killer determined to keep a dark secret buried, Kat must decide if justice is worth fighting- and -dying for.
Barnes & Noble
Amazon

Review
I usually only read romance. There are a few exceptions, Erica Spindler is one of those. She use to write romance, and I feel her books have enough romance in them to satisfy my needs. Like her past books, Justice for Sara is a well written story with a great plot, and some shady characters. In this book Spindler writes in the present and the past. At first I wasn't sure I'd like it but in fact, it made the story richer. You had insights you might not have gotten otherwise. You can't help feeling for Kat, Sara's sister. What she has gone through is frightening. Throughout the book you are kept on your toes trying to figure out who did it. I highly recommend this story. It's a must read! Happy reading!
Labels: Erica Spindler Romantic Suspense