Along Came A Spider by Kate SeRine 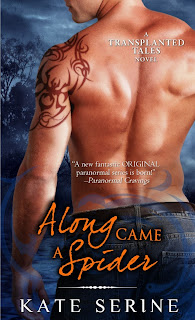 When Trish Muffet is attacked at a grisly crime scene, the last person she expects to come to her rescue is Nicky “Little Boy” Blue. But since walking away from everything two years before, Nicky’s been doling out vigilante justice as “The Spider,” taking on the vicious predators of the night in hopes it’ll lead him to his ultimate target – Vlad Dracula. And he needs Trish’s help.
Although Nicky’s renegade style goes against everything Trish stands for, she’ll do what she must to bring Dracula down. With danger stalking her, Trish knows the only person she can count on is the one man who has the power to leave her breathless. There’s no way she’s letting this spider frighten her away…
Amazon
Barnes & Noble

Review
I'm not a huge fan of first person but since I agreed to read it I did. The cover is what attracted me to the book. I didn't even pay attention to the fact that it was first because of it. I felt a little lost as I read the book like I was missing something and then found out that it was the third book in the series. Knowing that, I read it with different eyes. I love the nursery rhythms element of the story. It's such a cool idea. I found the book to be well written with likeable characters. I would read it in order just so you won't feel so lost. This book is out in digital on August 1st. Happy reading!

ARC received from NetGalley for a honest review