He’s determined to set things right, no matter the cost.

The last person Abby Crawford wants to face down is country music superstar Seth Kendall. Last time she did, she flat-out lied so he’d go to Nashville without her. She’s never understood why their mutual best friend proposed, but she went with it so her baby wouldn’t be fatherless. Now she’s a divorced mother of a teenager, and secretly Seth’s biggest fan.

Seth is home in McAllister, Texas for his father’s funeral…and a chance to meet the daughter he’s never known. He’s willing to face the music of his own making and admit he’s known about his little girl all along. For fifteen years he’s kept his distance because Abby told him to follow his dreams without her, insisting she didn’t love him. But now he won’t leave until he knows his daughter and she knows him, even if it means facing the woman who broke his heart for good.

Confessing she’s lied about her daughter’s paternity all these years won’t be easy for Abby, especially with her ex blackmailing her to keep the secret. And Seth doesn’t know the hardest truth of all: Every love song he plays on his guitar still plucks her heartstrings.

Seth leaned in. His lips were close enough to kiss, and his scent of sandalwood and something exotic enveloped her, taking her back to that night on the beach. His eyes flashed with the dangerous fire of his temper. It was similar to the flame of the passion she’d once seen in the green depths. Abby didn’t expect or want the heat curling in her belly, and shivered with a sudden and fierce desire.

“I’m her father, Abigail. I wanted to be her father after she was born. It was you and Mike who insisted I had no business messing things up.”

“I never said any such thing. You never tried. You just left.”

He pounded a fist on the counter top so hard she jumped. “Yes, I left! I wasn’t welcome at home. Dad ran me off with a shotgun. Mike wouldn’t even let me see my daughter. He made it quite clear you and he were happily married, and I had no place in your life. I was under contract to be in Nashville to start recording my first album.”

What did he mean, Mike wouldn’t let him see Emily?

Before she had a chance to voice her question, his eyes darkened as the pupils dilated, obscuring the stormy green. “But I’m no longer nineteen and scared shitless. I could make things very rough for you and this fantasy you’ve got working.”

A cold lump quickly replaced the tangle of heat in her belly. “What-what do you mean?”

He backed off and tapped the countertop. “I’m talking a custody battle. I could have a judge order a paternity test. I think we both know the media hoopla the results would cause.”

Her heart slammed into her chest wall. “You wouldn’t do that.”

“Try me. Now that I’ve met Emily, I want to get to know her.” He walked over to look out the kitchen window. The hard line of his jaw melted, and he swallowed so hard his throat moved up and down. “I was a fool when I let Mike talk me out of being in her life after she was born.”

He glanced at her. “Don’t pretend you don’t know.”

The strings of guitar music provided a soft counterpoint to the hard tension in the kitchen. Emily was outside on the patio playing around with her guitar, waiting for them to finish with the dishes she and Seth had insisted on doing.

“All I want is to have some time with my daughter. That’s all I’m asking for.” When he looked over his shoulder at her, sadness replaced the anger in his eyes. “I’ll keep your little secret. I’ll just be her favorite singer. The family friend who made it big in Nashville. I don’t want to hurt her. As much as it galls the hell out of me, I see what Mike means to her.”

He moved toward her and shoved his hands into the pockets of his jeans. “Besides, I don’t want to hurt Carolann or Frank any more than you do.” He glanced outside again, his voice husky as he spoke. “But I’ll sue you if I have to.”

A part of her wanted to give in to him, but a larger part wanted to punish him. Let him take her to court; she’d make sure the world knew what kind of jerk Seth Kendall really was.

She gritted her teeth and fisted her hands by her sides. “I’ll let you have tonight, Seth. But don’t ask for more.”

She turned away and strode through the French doors. 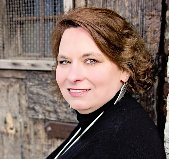 Bio:
Sara Walter Ellwood is an award winning author whose novel Gambling On A Secret was named by bestselling author Carolyn Brown in the Happy Ever After Blog on USA Today as one of her favorite romances of 2012. Although Sara has long ago left the farm for the glamour of the big town, she draws on her experiences growing up on a small hobby farm in West Central Pennsylvania to write her stories. She’s been married to her college sweetheart for nearly 20 years, and they have two teenagers and one very spoiled rescue cat named Penny. She longs to visit the places she writes about and jokes she’s a cowgirl at heart stuck in Pennsylvania suburbia.
She also writes paranormal romantic suspense under the pen name of Cera duBois.

I have to say that Heartstrings in by no means a new story line. When I started it I wanted to roll my eyes but I soon found myself reading more and more. I couldn't stop. Seth, Abby and Emily pulled me in. I was happy the author jumped on most of the secrets right away. No one wants to read a book that draws everything out. Now saying that doesn't mean the author gave you everything, leaving nothing for the ending, because she didn't. She keeps her story moving from page to page, ending with a bang. This is a very easy, well written story that is well worth your time. Happy reading!

Giveaway: (Sara is Hosting TWO Giveaways)
***Please leave valid email address to be eligible***
Make sure to stop by the other stops in the tour for a better chance to win! Tasty Book Tour