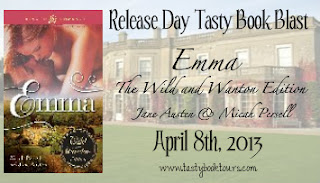 Emma: The Wild and Wanton Edition

OR, have your readers go to this "LINK" to enter,
http://www.rafflecopter.com/rafl/share-code/NTIxYWM0YzhjYmFkNDc1MDkxYzA3ZDNmMjhhM2RjOjI5/
http://www.tastybooktours.com/Emma--Wild-and-Wanton-Edition.html


Emma Woodhouse and Mr. Knightley won the literary world’s heart 200 years ago when Jane Austen first penned the story of their friendship-turned-love. Emma is the young, rich, beautiful heroine with too much time on her hands and an overactive imagination; Mr. Knightley is her long-suffering friend who is always trying to steer her in the right direction.


Their love story is one of deep, dedicated affection blooming into passion. But what about all of that sexual tension that crackles in the subtext? In this Wild and Wanton edition of Austen’s classic, Emma and Mr. Knightley burn up the pages as they give in to their baser natures. Discover the sexy scenes that readers of Emma have been imagining between Austen’s lines since 1815.


Mr. Knightley smiled, and Emma noticed that his lips were distractingly full. It was the only thought she was capable of before he startled her by moving from the settee to the chaise to sit beside her. The movement was slight and one he had often made in the company of others, but Emma was of a sudden reminded that she and Mr. Knightley had not been alone together, as decorum and Miss Taylor had dictated, since Emma was perhaps fourteen. Perhaps decorum was in the right. The moment they were alone, Emma’s thoughts were running rampant.


Mr. Knightley leaned toward her slightly, and she unconsciously mirrored the movement. She could feel his breath on her cheek as he spoke. “Come,” said he a bit roughly, “you are anxious for a compliment, so I will tell you that you have improved her. You have cured her of her school-girl’s giggle; she really does you credit.”


His words momentarily penetrated her focus on the way his mouth moved as he talked. She realised he had complimented her. Emma could not have anticipated the warmth she felt in her cheeks any more than she could have anticipated his praise. He was not one to throw around flattery lightly. “Thank you. I should be mortified indeed if I did not believe I had been of some use; but it is not every body who will bestow praise where they may. You do not often overpower me with it.” The last had slipped from her lips unheeded, and Emma wished the words back again. She could not tell what had driven her to reveal that thought, and in such a tone as to betray an injury Emma did not want to admit feeling. Emma could only blame the odd state of her mind at present. If she were to ever have hope of keeping her composure for the rest of Mr. Knightley’s visit, she must keep a tight rein on her thoughts.


Mr. Knightley gazed at her intently. Those eyes that she now saw had flecks of green in them had heat swirling within. He was sitting extraordinarily close. The chaise was small and afforded no ample space. She could feel the heat of his skin through his breeches and her skirts. Her gaze dropped to her lap where her hands had fisted together quite on their own. Oh dear, she thought as she felt her thoughts slip her control.


She was his own Emma, by hand and word.


He made a noise that seemed to emanate from deep within his chest, and the light kisses he had been gifting her with continued to travel up from her wrist to her inner forearm, to the hallow of her elbow at which point she completely forgot how to breathe.


He began to talk again, his breath caressing her skin as completely as his lips had seconds ago. “You have made me a very happy man, my Emma.” He punctuated the endearment with another kiss to her upper arm. “I had dared not to hope—” a kiss to her cloth-covered shoulder “—dared not to dream.”


His words trailed off as he pressed an open-mouth kiss to her collarbone. She felt the sweep of something velvety and wet, and her body jolted as she realised it was his tongue. She heard herself make a noise, and heard him echo it.


“I am forgetting myself, dearest,” he said hoarsely into the patch of damp skin. “Remind me,” he begged. “Remind me of how I should behave.”


Her Mr. Knightley, Emma thought with exultation, always so concerned with how one should behave. Emma was entirely uninterested in proper behaviour at this moment. “Not yet,” she whispered into his hair, the scent of the garden and sunshine greeting her as she rested her cheek against his head. “Please not yet.”


He groaned and his kisses moved to the hallow of her throat. “Your wish, my lady.” 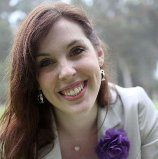 Jane Austen is one of the most beloved authors of all time. She never married, and as far as we know, she died a virgin. More’s the pity.


Micah Persell is the award-winning author of the paranormal romance series Operation: Middle of the Garden. She holds a bachelor’s degree in English and a double master’s degree in English pedagogy and literature, and she found particular delight in driving her professors to madness by imagining the characters’ salacious untold stories during class discussions of “serious literature.” She is beyond thrilled that the object of her professors’ horror is now her profession.

Make sure to check out the schedule for the upcoming review tour starting April 15th.
http://www.tastybooktours.com/Emma--Wild-and-Wanton-Edition.html