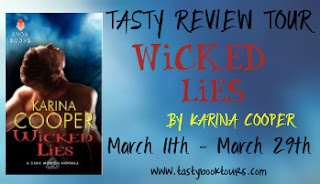 I was lucky enough to be asked to review Wicked Lies by Karina Cooper. I'll start by telling you that this is a M/M book. Going into this book I wasn't sure how I'd feel about the M/M part of the story. I've read a few and enjoyed some, but not the others. I'm happy to say that Cooper did a great job of giving us both a wonderful romantic story and a look at a M/M relationship. Happy reading!

Blurb
Jonas Stone has been given his first independent operation: rescue the insurrection leader's imprisoned grandson from the Mission. Getting the job done means more than getting Danny Granger out-it means staying with him while he heals. Staying too close, for way too long.

Danny is everything Jonas isn't: confident, optimistic, honest--a man to be reckoned with. If only it didn't mean going against everything Jonas has planned. He's kept his secrets for years, hid behind a mask no one could see through...until now. Danny isn't the kind of man Jonas deserves. But he might be exactly the man he needs...

Series Recap:
The streets of New Seattle have become a battleground between the Holy Order's agents and the witches persecuted in the name of "keeping of the peace". Battle-lines are shifting, good and evil not nearly so clear-cut as witches and rogue hunters have banded together in an uncertain alliance with rebels determined to peel back layers of conspiracy that go back decades before the cataclysm that changed the world forever. The Order has made it's move, overthrowing the city government in a bloody coup, and present-viewer Jessie, ex-hunter Silas, newly minted witch Naomi, the felon Phin Clarke, seer Caleb and genetically enhanced witch Juliet are suddenly thrown together with the displaced Mission Director Parker Adams and Simon, a double-agent whose witch genes are slowly killing him. The rebels need to gain some ground, get back their imprisoned people, or this will be the shortest rebellion in history.
Excerpt:
For my Uncle Stephen. You were the first man in my life who bravely came out to me, and who paved the way for me to be myself. I loved you so much before, and I love you just as much now. You are my inspiration.
And for every gay, lesbian, bi-, trans-, queer, and questioning youth out there. Life can be hard, sometimes it can get mean. There will be days when you feel like it’s impossible, but I want you to know that there are people like me out here who support you. I promise : it gets better.
Chapter One
A blue-white light flickered in the dark. Sparks glinted off the tool racks bolted to the wall across the shadowed room, reflected from the metal braces left leaning against the desk. As silence—mind-numbingly loud, thick as water, and twice as hard to breathe—filled the narrow room, that blue-white light caught in the circular lenses of a pair of glasses and threw a glare across the screen.
Jonas Stone stirred. “It has to be now,” he said, his voice too loud in the oppressive weight of the shadows behind him. He couldn’t look away from the feed spilling its incandescent glow over his desk, his keyboard.
His conscience.
Because the man framed in that digital feed—the kid strapped to the chair dead center of the surveillance footage—wasn’t the first suspected heretic to sit there. To sweat there.
To bleed.
“Be sure, Jonas. We get one shot at this.”
His brain wanted to look at the comm unit beside his left hand. His body refused to obey, every cell focused on the prisoner’s dark, drooping head. Scarred fingers twitched, knuckles whitening, and Jonas frowned as he realized his right hand had closed into a painful fist.
It had to be now. The kid wouldn’t last much longer.
“There’s no alternative,” he replied. “We’re not going to get another opening soon enough to . . .” He hesitated.
The voice over the comm link didn’t waver. Not even a fracture. “Soon enough to save him.”
Only through recent experience did Jonas know that the raspy, lifetime-pack-a-day voice coming out of the secure line belonged to a woman named May. Leader of a rebellion that had saved Jonas’s life, and the perpetrator behind a string of hacking jobs that left Jonas seriously reconsidering a career shift before the Church had made that choice for him.
The fact that she was very, very good was all that kept him from throwing in the towel now.
But he’d never met her in person. Hell, he’d never met the prisoner now struggling to raise his head in Jonas’s feed, either. Instead, all he had was a picture in a box, a hacked security feed, and too many hours spent staring at the incandescent screen until his eyeballs throbbed and the vicious curl of helplessness inside him turned to a spiraling ache.
That boy didn’t belong in that kind of interrogation room.
A single light, faded blue, gleamed over shoulders broader than Jonas’s, but not by much. The prisoner was athletically lean where Jonas was simply skinny. The narrowly defined muscles of his chest were outlined by the stained remains of a thin, long-sleeve shirt. Blood and sweat had turned it nearly brown. His slumped shoulders strained against the restraints confining him to the hard metal chair, a position not just awkward but painful as hell. Jonas hadn’t seen his face for over an hour.
He didn’t have to. He knew what he’d see when—if—the kid raised his chin again.
Blood caked into a ridged scab across the fine slash of his upper lip, under his broad nose and over a determinedly sculpted chin. He’d see the blackened stains of it dried into the man’s ears, blending into his dark brown hair. Even now, that greasy fringe flopped over his forehead, long since sweating off the gel that had held it into its fashionable spikes. The longest of the textured strands would slide into one swollen eye, if it ever opened again.
The prisoner had eyes the color of the computer-lit confines of the places Jonas preferred to inhabit. Almost black, even without pain stripping them to an endless void. When open, those eyes all but crackled with an intensity that could take a lesser man’s objectivity away in a single glance. Like a hungry kid or a kicked puppy.
Or a man on the edge of desperation.
Jonas’s chest kicked.
“Let me know when your people are ready.” He didn’t bother hiding the raw regret in his voice. He’d felt a lot of it, lately. After all, he used to be the man who helped put people into rooms just like that.
“Fine.” May’s voice cracked. Flattened. “I’m trusting you, Jonas.”
“I know.” They always did. “Let me try. I’m positive I can get him out. They won’t expect it this soon.”

Author Info:
Born from the genetic mash-up of lesser royalty, storytellers, wanderers and dreamers, KARINA COOPER was destined to be a creative genius. As a child, she moved all over the country like some kind of waifish blonde gypsy and thrived in the new cultures her family settled in. When she (finally) grew up, she skipped the whole genius part and fell in love with writing because, really, who doesn’t love making things up for a living?

One part romance fanatic, one part total dork, and all imagination, she writes dark and sexy paranormal romance and urban fantasy. When she isn’t writing, Karina is an airship captain’s wife and Steampunk fashionista. She lives in the beautiful and rainy Pacific Northwest with a husband, four cats, two rabbits, the fantasy of a dog, and a passel of adopted gamer geeks.Links:
www.karinacooper.com
@karinacooper /https://twitter.com/karinacooper
http://www.avonromance.com/author/karina-cooper
Here are the other stops on the blog tour. Stop by and visit them.
March 27th- Paranormal Book Club
March 28th- Books and ButtafliesMarch 29th- Toots Book Reviews